There is a popular adage that says you can never keep a pregnancy hidden for too long as, after a few months, it would show regardless of any type of camouflaging. While that might not be true in its entirety, given some people never know they are pregnant right until they actually give birth, as their bodies never have any noticeable physical changes. But I digress.

Nigerians get offended easily when they don’t know about certain things they feel they should know about. It hardly matters that they might not be directly affected by the outcome of the event. No new thing there and definitely no worries, as it is part of the fabric of our society to know more than is necessary about our neighbours, our siblings, our partners and their siblings.

It was this very feeling that got Chioma* and her husband into hot water with her in-laws. True, they had been trying to conceive for about three years, but had only suffered miscarriages, which led to the mother-in-law visiting all three times, to take care of her. It never mattered how much they tried to dissuade her from coming, as soon as news of the miscarriage got to her, and she asked her son if they did not want her to come, he would often feel blackmailed and then agree to her visit.

Whenever she came, she would be come in tow with all sorts of herbs that were supposedly to help Chioma recover from the miscarriage, and prepare her body for a new pregnancy, and each time, she would insist that they tell her immediately she got pregnant again.

That went on until she got pregnant the fourth time. Truthfully, Chioma did not immediately realise she was pregnant. Even when a colleague at work commented on her paleness and asked if she was taking her iron supplements (as she lost a lot of blood when she had the last miscarriage), it didn’t register.

She did not pay particular attention to it, as the doctor had given her the all clear at her 8-week visit after the miscarriage, and nothing had shown that she was pregnant. But when another person commented that she was looking pale again, (which was a symptom of pregnancy for her) she decided to take a pregnancy test, and it was a pleasant surprise when two pink lines showed on the kit.

The next day, she booked an appointment with her doctor to find out far along she was. All the while, she had not told her husband, who had travelled out of the country for work. Not because she did not want to, but because she felt it was news best delivered physically, not over the phone. More importantly, she did not want to tell anyone they were pregnant, she wanted the pregnancy to announce itself literally. Which might happen if she told him over the phone, as it would only have taken a phone call for him to tell others.

When her husband came back home two weeks later, it was a case of quiet ecstasy, after all this was not the first time they were getting pregnant. And miraculously, he did not attempt to call his mother immediately, or even any one of those people that he usually called when they got pregnant.

It was later at night that Chioma presented her case and suggested that they tell no one that they were expecting. They both agreed that they would not tell either set of parents, but would just let them find out when the pregnancy shows itself.

It would have been a diplomatic nightmare anyway, if one set of parents had known about the pregnancy while the second set hadn’t. Their sealed lips regarding the pregnancy extended to their friends, and anyone else in their circle. If they found out and congratulated them, fine, if not then it was simply a matter of not being the first to divulge their good news. 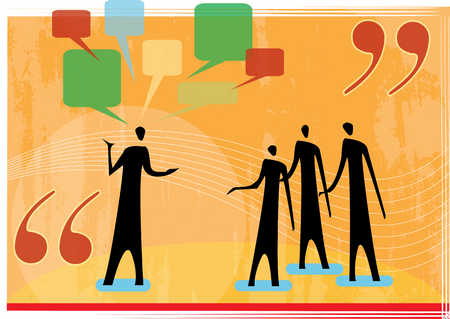 But, she literally walked into the lionâs den during her sixth month. They had to attend a family gathering; one of her husband’s nieces was having her introduction. By this time, her bump was visible enough for everyone to see, and it was a beautiful thing to behold. In fact, it caused some small commotion, as family members stumbled over each other in their bid to hug and greet her.

As for her husbandâs mother, while she smiled with her lips, her eyes were filled with questions which she kept darting in her son and his wife’s directions. Why didn’t they tell her? Her sisters and friends said their congratulations and pointedly asked her, why she had not told them as usual.

That night, as they left the introduction ceremony, the Grandma to-be went home with them. There were some needed explanations to be made to her. She pointedly felt they owed an explanation for the embarrassment. She found out just like everyone else, that her daughter was expecting. What an insult that was!

When the couple explained the rationale behind their choice not to inform anyone of their pregnancy, it was still not accepted, but when she asked if they had told Chiomaâs parents and the answer was in the negative, she calmed down a little and made them promise she would be the first person they called as soon as she had given birth. Chioma and her husband agreed. Then, they explained how they felt that they had been too open with their trying to conceive journey, hence unnecessary questions had arisen from different quarters about when they would have a baby. Honestly, people have no chill! How was it their business?!!

More so, their miscarriages were public knowledge, and that seemed to further fuel everyone’s curiosity, putting the hapless Chioma under a microscope, with everyone watching for the next sign of pregnancy with her.

But you know what? Chioma and her husband did have the right to refuse to tell anyone she was pregnant. Although it was difficult not being able to tell even her own mother that she was pregnant, considering how close they were. Many times, she had longed to tell her, but had soon resorted to other means; dropping hints which her mom soon caught on. So, even though her Mom knew she was pregnant, she did not break the pact she had made with her husband…technically.

This ‘who should we tell first’ business, is a burden that TTC couples have to bear, especially when family members and friends, who have known you forever, are involved. But it need not be one they have to bear.

A couple should be free to determine who gets to hear the good news of their pregnancy, and even who gets to hear that they are trying to conceive in the first place. It does not help the couple to have everyone poking their nose in their business, as though they were living their lives through them. The best well meaning family and friends can do is pray for them and be there, should they ever indicate they would like some company

Chioma eventually gave birth to a baby girl and the couple invited everyone to the baby’s christening and that helped to calm ruffled feathers and noses out of joint.

I’m so glad it worked out fine for this couple. For other couples, what matters most is they agree on who should hear their news first.

Have some more baby dust!

Protected: The One! 7: Kay for Kayode?

From a Size 18 to a 10! Temi Awoyemi Shares Her Weight Loss Secrets!

Protected: The One! 7: Kay for Kayode?