We all know how mechanical timing sex with our spouses can get…it’s not a fun ride for anyone. However, it is a necessity that we must partake in, in order to get what we want beautiful babies to call our own. There are a few things as annoying as having to time, sex month after month, without getting any results…especially when the doc has okayed your and your spouse’s reproductive health condition. If you are like me, you are probably frustrated by the third or fourth month. Now, here’s what I was doing (which in my head was perfect). I started taking Pregnacare Conception pills, and DH got zinc and iron supplements of his own. I have a regular 28 day menstrual cycle, so timing my ovulation wasn’t hard. From four days before my ovulation, we would stay off sex because we heard that staying off sex days to ovulation helped the swimmers to be strong, agile and ready to mingle. Then bam, on my ovulation day and the couple of days that followed, we would work at it like our existences were on the line. Then I would wait…wait for the month to pass without my red visitor showing up. But in two weeks, she would come knocking. Month after month, she kept coming, even when I knew I was timing myself right…or so I thought.

Now, what I didn’t know is that the female egg lives for only twelve hours after release, so there was always a tendency of the egg getting released by 4am and I start my bedroom workout by 6pm. Of course, the egg would have died off by then. Despite the fact that I was having sex on my ovulation…my timing was still wrong! Let me enlighten you a bit more. Our eggs die really fast, but our partners’ swimmers live for longer! As long as four days! So the trick is having sex from three days before your ovulation, the day of your ovulation, and then the day after as well (just incase the egg didn’t get released on schedule). A woman having sex six or five days before her ovulation will likely not get pregnant, and a woman having sex a day after her ovulation, or even 13  hours after her ovulation, also has very low chances of conceiving.

The fertile window describes the few precious days in a woman’s menstrual cycle, when pregnancy is possible. I call them the days of divine appointment. These days reflect the lifespan of the ovum as well as the lifespan of the sperm. So you can look at it as a four day fertile window, because having sex on any of those four days (three days leading to the ovulation and the day of the ovulation) gives you really high chances of getting pregnant. At the end of the fertile window, the probability of you getting pregnant diminishes and you would probably have to wait till your next cycle to try again. Candidly, judging by how mechanical timed sex can be, I think its best to get it right, and to get it right fast…so you can quickly move on back to the days of spontaneity and careless abandon!

Confused about your fertile window? 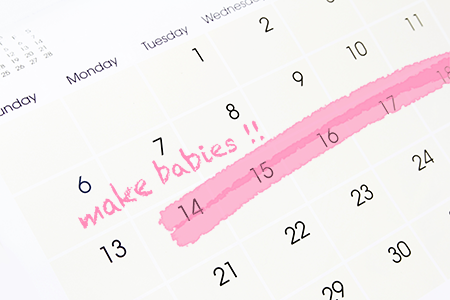 I have a few friends that do not ovulate like the rest of us. Chidinma for example, calculated her period and timed herself, believing that her fertile window starts eleven days after the first day of her period. She applied all the techniques in the book oh! From arching her waist up when receiving her hubby’s precious seed, to remaining in that slant position for ten minutes so the swimmers can drive directly to the reception party that the egg was holding, to not getting up from the bed for about an hour, because she didn’t want dearly beloved swimmers to slide out. Nothing worked! One time, hubby travelled and returned the day she finished her period and they had a steamy romp. Chidinma’s period didn’t show up for the next nine months. She was still breastfeeding her first child when she took in again. It turns out that Chidinma’s fertile window comes immediately after her period.

With an ovulation kit, you should be able to tell when you are ovulating, just in case you do not get the obvious signs like mild fever, mood swings, egg white cervical mucous, tender nipples, swollen breasts, etc.. Doctors also recommend that if you are not sure of your fertile window, having sex every two to three days can optimize your chances of taking in. The trick here is, at least on one of those two to three days some swimmers would jam lady egg whenever she decides to make an appearance.

Take care darlings, and baby dust to all *In Nicole’s voice*