OMG, I feel like a druggie!!  I have pregnancy multi vitamins with Omega 3, aspirin (75mg), and extra vitamin B6. I was also going to get agnus castus, but feel i might be over doing it! So much for keeping it natural! I am also armed with 20 cheap OPK sticks, as I’m not sure if last month was a normal cycle, so not taking any chances! I have also ordered some Pre-seed as well…I reckoned I may as well go the whole hog!

I am really really bored being off work, with nothing but housework to do (that’s why I have so much time to write in my journal all day!). Not that I want to be at work though. I absolutely despise my job, and the long commute I have to make to town everyday. But, for now, it pays the bills. As soon as this TTC business is over, I’m definitely going to look into getting another job.

Speaking of TTC, I’m really annoyed! I’ve had light headedness for nearly 2 weeks, and twinges on and off my left side. As my period is finally over, I can’t blame it for all these weird feelings. My body has mastered the art of playing the kind of tricks that would make even David Blaine green with envy! Hmmm…God dey oh! God dey! 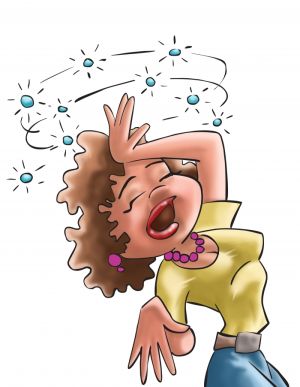 Javier and I went for our appointment with our new doctor today. We had to have our bloods drawn, and that didn’t go down too well, because did I mention I don’t do needles? I think I shocked even Javier with my behaviour, as soon as the syringes and needles were unsheathed. I DON’T DO NEEDLES!! He had to physically restrain me before I agreed to submit my arm for the test. Luckily, the doctor was pretty quick, and it was over before I knew it! But not before I came up with my new mantra of “Don’t faint, don’t look, don’t faint, don’t look!!!.”

During the consultation, the doctor panicked me! When I told him about the symptoms I’d been having, he actually said something about how I could still be pregnant, and was maybe having another miscarriage. I quickly cut in, telling him I’d just had another period, before he could get my hopes up. Hmmm, this doctor will have to do a whole lot to impress me after this!!!

Anyway, my blood pressure turned out normal, so that’s good. I get the blood work test results on Tuesday. I’m really not sure what they are testing for. I probably should have asked, shouldn’t I :scratch:. Oh no! What on earth will I ask when I call for my results? This is what I reckon the conversation will be like:

Me: My name is Tayo S…just ringing up to get my blood test results please.

Receptionist: Ah, yes Miss. They are positive/negative/normal (delete as appropriate)

I definitely should have paid more attention. Hopefully, Javier will have a better idea, as he seemed more engaged with the appointment, in general. I definitely have to find a way to confirm this, before any attempt at calling for results!

Anyways, back to this TTC matter. Last night, we

just for fun! It’s too early in my cycle to be doing it for any other reason. I’ll probably start with the OPKs from tomorrow.

As I was drifting off to bed, I decided to check my messages, and instantly regretted doing so. I had a WhatsApp message from my Mom, telling me how my Aunty Bisi (whom the entire family believes is clairvoyant) recently had a dream that I was pregnant. My Mom had, apparently, swallowed this as gospel truth, and in her mildly worded, even toned message, I could decode that she was trying to find out if, in fact, I was. I was too upset to reply, and proceeded to turn off my phone and fling it away. This ish is getting real!

I managed to conceal the fact that sleep had deserted me from Javier, and when he came into the room, my act of the sleeping spouse could possibly have won me an Academy Award! As Javier slept, even though my eyes were closed, my mind was fully alert. I thought of my older cousin, Toyin, who was in her 7th year of marriage, but with no kids yet. I thought of how drained she always was, especially after every family event, when one Aunty or the other, my Mom included, had some choice words to share. As time went on, she had stopped attending family events altogether, and who could blame her!!! I knew I was lucky because I was thousands of miles away, but still…I was beginning to feel the heat!

I reached for my discarded phone, powered it on, and proceeded to send my Mom a curt “I am not pregnant!” message. No need to sugar coat it. It is what it is…at least for now!