I also spoke with Solape today. She says she’s not yet ready to tell her family…and went hysterical when I told her of my plan to locate her ex’s wife. So, that phone call didn’t end too well.

Back to this my cycle matter ojare! I’ve just realised that I need to note in my journal what cycle day I’m on, or I might know when I read back. So…today is CD22…and 8DPO!

After a lovely Chinese take-out dinner (my husband knows exactly what to do to cheer me up…bless him! I eventually told him about what happened yesterday, and coupled with the fact that I resumed work today, he knew I needed some cheering up), I decided to have an early night.

Before going to bed, I decided to think back and note any symptoms I might have had today: 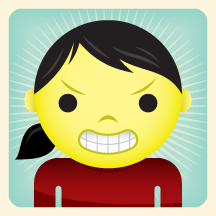 Work was a nightmare yesterday! It was almost like my boss had just kept all the worst and most difficult projects piled up for me, so I resumed to a mountain of work on Monday. If that was all, it wouldn’t even have been too bad. What made it horrible were the unrealistic deadlines attached to each one, and the accompanying harassment from the evil man! Aaaaargh! I hate this job!

By the time I got home, I was in no mood to write in my diary. That, and the fact that my symptoms seem to dissipating by the minute!

Well, it’s CD24 today, and I am supposed to be 10DPO…and it has been another day of no symptoms…except you call the return of the gas, and faint cramping symptoms. Yawn!

I am wondering when would be a good time to test. It’s hard not to, especially when I’m so close to the end of this cycle. Up until today I was about 80% sure that I had gotten pregnant this cycle…after all, why wouldn’t I be…especially after all that holiday sex. But today, I am almost convinced the cycle has failed, and am EXTREMELY UPSET about that!

Now, I feel quite teary and low…which are classic AF symptoms for me. And to add insult to injury, my husband was on the phone with his sister, and when she asked if we were TTC, my husband went and replied “Sort of”. Sort of??! I was so mad, as we had agreed that we wouldn’t say anything to anyone. Now that his sister knows, she will most surely tell their parents and siblings! I just know that next time we visit, they will be asking for ‘any news’. Gosh…I was so annoyed!!!

Javier couldn’t understand why I was so upset, and that made me even more upset. His argument was that after all, I’d told my own Mom! But my Mom won’t go telling the whole world now, will she?!! She hasn’t even told my other siblings!

In annoyance, I stormed to the bedroom and locked the door. It would be couch time for Mr. Over-sharer! As I sat on my bed, I stared at my phone as various calls came in…first from my Mom (it’s almost as if the woman has a 6th sense, and knows when I am upset), and several from Solape. But I didn’t answer any of them.

I felt bad about ignoring Solape’s calls, but I knew I had to be in a good place before I could have any decent conversation with her. I was so jealous of her, I couldn’t even think straight! All I wanted was what she had! I had the marriage, I had the husband…I was the one who deserved the baby…not a home wrecker like her! She knew fully well that her ‘boyfriend’ was married, but that didn’t stop her. I wondered if the guy had children, and I thought about how, even as an adult, my own life had been destabilized by another home wrecker like her. His kids would probably be very young, and worse affected by their father’s behavior. And getting pregnant 5 times??! Hadn’t they ever heard of protection? This wasn’t the 18th century! How careless and foolish could she possibly have been! Forget pregnancy…what if she had contracted a serious STD?!! And not telling her family, despite being almost 5 months pregnant?! A 32 year old woman?!! Puleez…I just couldn’t deal! Hissss!

I mumbled a prayer before falling asleep, I found myself not asking…but demanding God to give me my baby…or else! Haba…if He could bless an adulterer like Solape, He just had to bless me too!

For the TTC Newbie