As of 1 January, it is illegal to pay men more than women in Iceland.

The Nordic country is the first in the world to make equal pay the law, following an announcement of the legislation on 8 March on International Women’s Day 2017.

Under the new rules, companies that employ more than 25 people are obliged to obtain a government certificate showing their pay equality policies, according to multiple reports. Companies will face a fine if they do not comply with this law.

‘The legislation is basically a mechanism that companies and organisations … evaluate every job that’s being done, and then they get a certification after they confirm the process if they are paying men and women equally,’ Dagny Osk Aradottir Pind, of the Icelandic Women’s Rights Association, told Al Jazeera.

‘It’s a mechanism to ensure women and men are being paid equally.’

It makes sense that Iceland is the first nation to take this step to closing its pay gap. The new legislation has been strongly supported by both political parties in Iceland’s parliament, where nearly 50 per cent of the lawmakers are women, including the new Prime Minister, Katrin Jakobsdottir.

For the past nine years, Iceland has also been ranked by the World Economic Forum (WEF) as the world’s most gender-equal country. (The UK was placed in 15th spot out of 144 countries ranked in the 2017 report). 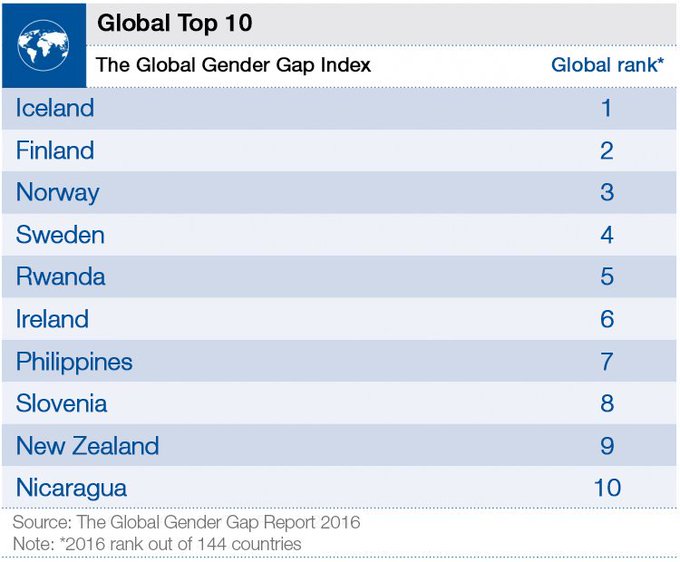 The new law comes after Iceland pledged to close the gender pay gap by 2022. Icelandic women, on average, earned 14 to 18 per cent less than men in 2016, the WEF reports.

Speaking at the Global Leaders’ Meeting in 2015, former Prime Minister Sigmundur Davíð Gunnlaugsson said: ‘Men cannot sit idly by when issues such as gender-based violence and the gender pay gap are being discussed. These are not only women’s issues. These are issues of general human rights.’