“And I wasn’t even trying oh! In fact we only had sex once…and not even when I was ovulating!”. “Can you believe I got pregnant when I still my IUD in??!! Gosh, this is so frustrating!”. “I better hurry back to get my contraception sorted, because once this my husband touches me now, na belle be dat!”.

How many of us have had to listen to lines like this, through gritted teeth and plastic smiles. When I was TTC, hearing about people getting pregnant wasn’t too bad…I was soon able to develop a good coping mechanism, so that was fine…eventually. But what consistently got to me were the sometimes deliberate, and sometimes innocent, boasting by those whom nature had blessed in the fertility department. The smugness, the nonchalance, the borderline arrogance…all of which always succeeded in rubbing me the wrong way. But like a pro, I had to learn how to exhale, and pretty much just play along, giving them whatever reaction I knew they wanted.

I reiterate that it wasn’t the fact that they were so fertile that I found annoying. Not at all! For example, one of my closest childhood friends is one of the most fertile people God has ever created! She claims to have put a full stop to her child bearing after 6 kids, but with her, you never really know. Back then, every time I saw her, she had a baby bump. But she never once tried to rub it in my face, and, in turn, I never felt awkward around her. In fact, with each baby bump, her exasperated look was always sure to make me break out in giggles. So no, my grouse was not over the fact that these people were so fertile. It was essentially their attitude about it that got under my skin.

One of my former work colleagues is a perfect example of this. She had been married a few months, and made a point of telling anyone who cared to listen about how they were going to wait at least 2 years before trying for a baby. Well, good for her right? At that time, I was so engrossed in my own TTC efforts, that I hardly paid any attention to things that didn’t directly impact me. At one of our weekly meetings, she sat across the table from me, and I noticed that she kept sighing heavily, and rubbing her stomach. For the life of me, her being pregnant didn’t cross my mind, and I just thought she had had one too many yamaritas for lunch. In hindsight, I realised she was probably doing all that for my benefit. It wasn’t until a few weeks later, when she stopped by my desk to make small talk, that I saw the undeniable bump underneath her oversized dress shirt. She followed the direction of my gaze and let out a deep sigh, “Can you just imagine! Me that I wanted to wait 2 years!!!”. I was then forced to hear all about how her contraception had failed, not once, but two times apparently….how she got pregnant whilst still having her IUD, suffered a miscarriage, replaced the IUD, and got pregnant again, all within a 6-week period. “I don’t even know if I should be happy about it, because you know we had plans!!! I told you of our plans to attend the Grand Prix in Monaco this year, right?” she continued. Luckily, hearing that, no, she hadn’t told me about Monaco, led to a temporary change in topic, before she concluded with the kick-in-the-stomach statement of “I’m not even sure I want this baby now. Couldn’t it wait just a few more months?!!”. Hmm, way to rub it in. When I told my husband about our discussion, he thought I was being unnecessarily sensitive, and that she had just been telling me what had happened. And since I couldn’t eloquently describe the condescending tone and body language, there was no way for me to convince him. But my vindication came a few months later, when her husband, who was also a friend of my husband’s, mistakenly revealed that they had never been on birth control, and had been actively trying even before they got married. *Cue Austin Power’s ‘oops’ face*

Another interesting encounter I had was with my husband’s friend’s wife, who found out she was pregnant when her first son was about 7 months old. “I can’t have this baby!!! I have to get an abortion!!!” were the first things she said when she called me. My period has just arrived that morning, signalling yet another failed cycle (number 25, if you were counting), and there she was, telling me about getting an abortion. While I was still trying to compose myself, and also think of the right thing to say, she continued with “I’m going to ask Uju* where she got hers last year”. I almost collapsed. Uju was a mutual friend of ours, who was happily married, with 3 kids. To hear that even she had been leisurely terminating pregnancies, whilst I was there praying and crying to be blessed with it just the one time, made me want to just wag my finger and shout out to God, and demand why???!!!

In the end, I had to learn some critical coping strategies. I realised that I didn’t have any control over when, where, or how I would encounter tactless people, but I could control how deeply their words affected me. In the early days, after an encounter with such people, I was surely bound to have a good cry and sulk, followed by a pity party, which sometimes could last for days. So, for those who were deliberately tactless, their intentions had hit the bulls eye, and gotten them exactly what they wanted. But by the time I learnt how to shake it off, chances were high that I wouldn’t even remember the conversation by the end of the day. 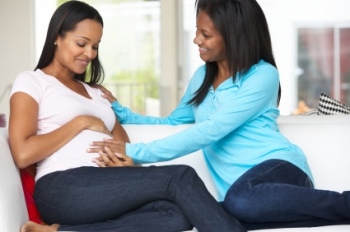 The one thing that helped me cope with these feelings was talking about them. My best friend was on permanent speed dial, so whenever anyone tried to rock my boat with an insensitive statement, I would call her before the negative words had a chance to set in my brain. I found that actually relaying the conversations took away their power, and I was even able to see the humour in them sometimes. Like, even before we found out that my former colleague had been lying through her teeth, it was my best friend’s analysis of the ridiculousness of the supposed timeline, that cracked me up, and helped make light of the whole situation! No, it’s not gossiping. It’s just you sharing details of a difficult encounter. Trust me, the mere act of talking, or even writing about it (if you’d rather not talk to anyone), is incredibly therapeutic and able to help you immediately see the bright, funny, and/or optimistic side.

I had yet another part of the recovery process that actually put to rest any negative feelings still lurking. I always made a conscious effort to say a prayer for the party/parties in question, and tried to look at the situation with a totally different set of eyes. For example, I stopped seeing my colleague as the person who lied about getting pregnant whilst on contraception, and instead started seeing her as someone who was bringing life into the world. I stopped seeing her as that person deliberately displaying her bump to make me feel bad, but instead as a pregnant woman who needed my prayers. So, I prayed for her and her baby, and for the delivery to be smooth and hitch free. By the time she eventually gave birth, I didn’t even remember the resentment I had nursed when I first heard her news.

It might not work the first time you try it, but trust me…it’s the best way to overcome ‘baby envy’. Because there are so many more important things you have to worry about, as a TTC woman. Adding sadness over insensitive comments and fertility envy, should be the least things to add to that list.